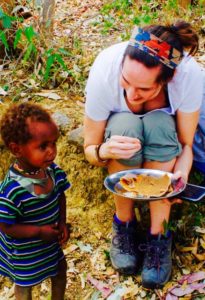 I’ve been asked often and even criticized on occasion for creating a foundation in memory of Charlie that supports families primarily in Ethiopia. Why wouldn’t we focus on families in our own community? What is the connection to Ethiopia? I guess it makes sense to wonder how this all came to fruition. So, in the words of Julie Andrews in The Sound of Music, “Let’s start at the very beginning … a very good place to start.”

I have always been a bleeding heart. Since I was a little girl, I did not take kindly to the inequities of the world and often thought, if only I could fix them. When I was in elementary school, I remember visiting Washington D.C. with my family and taking a gallon-sized ziplock bag of change with me. As we walked around this vast city, I gave out change to each homeless person I met. It made me sad to think of them sleeping on the streets while I was tucked in a warm bed at night. At such a young age, I may not have understood the many complexities of poverty, hunger, and homelessness – but I knew it wasn’t right.

As I grew up and started college, I became more aware that the world was far bigger than my little bubble in Raleigh, NC. To be honest, it scared me to think that I was just a blip on the radar of life. During undergrad, I had the opportunity to travel abroad, spending time living in several different countries. Living as an outsider in the midst of another culture makes you hyper aware of our differences and yet casts a light on our innate similarities despite where we live. Even though I’m an American who looks and speaks differently from a Spaniard, my needs are the same. We all want to be loved, cared for, and find a little bit of happiness in this life.

I don’t quite recall what the trigger was for me, but at some point I became enthralled with Africa. I wanted to find a way to travel there, spend some time in that far from home continent. It could have been my desire to travel and my yearning for new experiences. But, I think deep down, it was the realization that very few people in my home country desired to travel there and my parents were adamantly against it. This alone made me want to jump at the opportunity.

It was in 2007, after my second year of teaching, that I finally pulled the trigger and went on my first trip to Ethiopia. Reluctantly, my father drove me to D.C. and put me on a flight via Ethiopian Airlines to spend the summer living and volunteering in the city of Addis Ababa.  I’ll never forget the look on my father’s face as he walked me up to the airline check in counter. It was so crowded you could literally have plucked me out like a shiny grey hair on a full head of brunette. I was clearly the minority flyer on this flight. My dad, who is not typically the sensitive type, hugged me hard and gave me one final chance to back out, “Honey, you know you don’t have to do this?” I knew I didn’t, but the adventure was too great to pass up.  So all alone, I flew 17 hours across the globe.

That summer was the most amazing summer I’ve ever lived. I worked in orphanages, each a little different from the other. At one, I taught English to children of varying ages. At another, I witnessed many international adoptions where I was able to see firsthand the beauty of children meeting their forever families for the very first time. And at the largest orphanage, I spent time serving over 400 HIV positive children ranging from birth to early adolescence, and volunteered twice a week at a free medical clinic known as “Mother Theresa Hospital for the Sick and Dying Destitute.” It wasn’t exactly the most uplifting of names but a very accurate description nonetheless. Although a “forenge” (a foreigner in Amharic), I tried to live life as much as an Ethiopian city dweller would. I took public transportation, ate at local restaurants, and tried to pick up as much of the native language as I could. Undoubtedly the hardest cultural difference I had to accept throughout the duration of my trip were the goats that frequently traveled with me in the already cramped mini buses I took to and from the home I was staying in. Hearing the tethered goats wail as they were squeezed into small spaces and endured the bumpy rides through the city was definitely the poster advertisement for PETA’s next animal cruelty campaign … an organization that definitely doesn’t exist in Ethiopia.

Regardless of the many cultural differences, as the days passed I grew fonder of the people in Ethiopia. They were without a doubt, the most endearing and loving people I had ever met.  Families living on the streets in makeshift homes built from cloth fragments and tarps, clung to their children begging for help for food. Yet, they still cuddled their babies, nestling close. And under the filth you could see them smile and laugh trying to entertain and bond just like I do with my own. Other more fortunate children played soccer anywhere they could find open spaces, whether on a street or in a muddy alley between the shanties in their neighborhoods. I watched as mothers cooked injera (common pancake-like bread) for their families and fathers – if children were lucky enough to have them – sell goods out of the rudimentary suks (stores) adjacent to their homes as a means of providing income for their family. Each family, despite appearing so different from my own, still exhibited the same unifying quality … love. And that’s what drew me in, and where my desire to be part of Ethiopia began.

As my summer drew to a close, the more I wanted to give back to Ethiopia. To help lift up its people allowing them to love with a little more security than the living conditions that were common among them. I vowed to myself to come back to Ethiopia and serve again. Maybe one day I would adopt a child from there or at least serve its people for another summer.

Then life happened. I returned to the states and met Michael the following summer. We had an extremely fast romance and within six months (to the day, I might add) we were engaged. I began working toward my Master’s degree and one year after we were married, we were pregnant. Now, for those of you who don’t know us, Michael and I have always ridden in the fast lane of life. We had planned to wait a little longer to have children or buy a house, get married, go to Europe … you get the point. We just never got around to following the timeline we created for ourselves. Still, the ‘dream’ of returning to Ethiopia never left my heart.

Raising children, as all of us know, is particularly grueling. You want to do what’s best for them, meet their every need and desire. And yet also show them that they, in fact, are not the center of the universe. And yet their life is pretty damn good in comparison to the rest. When Charlie was able to talk – or talk back, I should say – he said the typical kid things like, “that’s not fair” or “but I want to.” But never did I have to address compassion for others with him. He was the boy who found the child on the playground that wasn’t playing with the others and played with him. Not because I taught him to do this, but because his little soul was born feeling inclusive, wanting to make everyone comfortable and welcome regardless of how they looked or who they were. I enjoyed watching Charlie interact with others because his love was so unconditional. I knew that Charlie’s heart was truly that of a humanitarian.

When Charlie died, that horrifying day in April, no one knew what to do for our family and we clearly didn’t know what to do for ourselves. But God knew better. He put people into our lives to lift us up even when we felt our burden was too heavy to lift. Friends from the past came out of the woodwork. One in particular, a college sorority sister, started a You Caring page in memory of Charlie. Over the course of the next few months, the site raised thousands of dollars. Not being able to think long term, my sister suggested setting up a foundation, maybe for an annual scholarship in Charlie’s name. “Ok, that sounds good,” I said hesitantly. It wasn’t until I spent time with a mother from Charlie’s soccer team, that the pieces came together for me. She asked, “What do you really want to do to honor Charlie?” I replied, “I want to serve others like I know he would have done if he could have lived his full life. I want to do work in Africa.” Without missing a beat, she replied “I’m going to help you do that.” That was the beginning of Charlie’s Heart Foundation.

Along the road this past year, we have had many “God Moments” as I have lovingly called them while building out this foundation. From our first partnership conversation with Addis Jemari – who we had no idea served families in Africa, let alone Addis Ababa, the city I fell in love with 10 years ago – to the moment I had in church on my first visit back to Addis when I asked God to give me a sign that this was the right mission for Charlie’s Heart Foundation. As the band played “Amazing Grace,” one of the songs we played at Charlie’s memorial, I knew in that moment that this was exactly where God and Charlie wanted us to be. We are a small foundation, doing work out of our homes and made up solely of people who want to volunteer their time to support us and Charlie’s legacy. Our goals are lofty but our hearts are full. Full of love for Charlie, his foundation, and the people of Ethiopia.