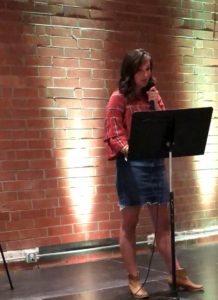 I’ve never been great at being in front of an audience. As a child, I was in various extracurricular activities (e.g. dance, choir) that required me to be in front of an audience. While I liked the practices, I hated the performances. I always requested to be in the back row of everything … except for ballet. I was clearly a D-lister in that artform because I was automatically placed in the back during those recitals.

I remember signing up to sing for the talent show in the fifth grade. I was “psyched” (fifth grade lingo from 1990) about it. The practices went well and dress rehearsal couldn’t have gone better. But I bombed the performance. I could barely sing a note when the spotlight turned to me. Since then, performing anything on my own, has been terrifying.

It’s been a long year and a half of terrifying experiences. But when one of our partners, Addis Jemari, asked me to speak at their kick-off event for the Family Empowerment Program – the ministry we at Charlie’s Heart Foundation proudly support – I had to say yes. And it wasn’t one of those yeses when you agree outloud but inside you are vigorously shaking your head no. It was a genuine yes … although, I really was quite scared to do it.

The week of the event, one of the founders of Addis Jemari gave me a few talking points to cover. Awesome, I love working with perimeters. I was always really good at knocking out school assignments well before the deadline. I could totally write a speech, practice it (because I am really good at practicing), and be golden by the time I had to actually give it.

Well … my plan did not go accordingly.

Fast track to the day of the event. No speech had been written when we loaded the whole family in the car, including the dog, and headed to Raleigh. “That’s ok,” I told myself, “I will have plenty of time to write it on the three-hour drive.” Just as I started to put my earbuds in and type away, Rosie (our dog) started puking … everywhere and on everything. So 30 minutes into our drive, we pulled over and got everyone out of the car. Everything got wiped down and the dog bed was thrown in the trash. And, with a few residual gags from me over the smell, we loaded everyone back in the car and continued on our way. Only this time, to prevent more upchuck, Rosie got to sit shotgun while I was forced into the third row.

On the road again, my earbuds finally made it in as I tried to hunker down and get this speech written. I started typing out my thoughts when I began to feel my own sense of motion sickness come on. But I was determined. Determined to meet this deadline, and get words into print. So every few minutes, when the phlegm in my throat would rise up, I’d force it back down and keep hammering away.

It was a struggle to get that speech written, almost humorous at times because of all the ridiculous roadblocks I encountered. But by the time we arrived in Raleigh, it was finished. Complete but not at all practiced.

I attempted several times to find a corner to hide, to practice my speech prior to giving it that evening. However, each time I slipped way, I was stopped by someone who wanted to talk or something that needed to be done. Practice is my greatest strength. How on Earth could I perform well or at all, if I could not practice? It was as if God did not want me to practice.

Before I knew it, I was called before the audience. No practice, just performance.

As the words began to flow about Charlie, his life, the foundation, and the amazing things we’re able to accomplish through our partnership with Addis Jemari, I realized this wasn’t like all the other times in my life where I found myself on stage. What I was talking about was not prescribed and could not be practiced, because it was not to be performed. The words I spoke at ‘A Night of New Beginnings’ were from the heart.

Later that evening, a lady from the audience approached me. She thanked me for what I said that night and remarked, “I am sure it was so hard for you to speak about your son given all that you have been through.” I responded by saying, “No, it wasn’t difficult at all.”  I went on to say that, in fact, it was so easy to speak about him. What is hard is when I don’t feel like I can, when I feel like I have to refrain from speaking about Charlie. Charlie is my son and Charlie’s Heart Foundation is his heart continuing to beat. Speaking about those topics is like breathing, it just comes naturally.

Speaking truth about anything is not something that can be practiced or performed. Authenticity comes from within. I believe that is what God wanted me to learn that week when I was faced with so many obstacles in writing my speech. God wanted to remind me that I don’t need to practice what to say about Charlie, what he means to us, and how his life has continued through his foundation.  Speaking truth is speaking from the heart and those words will always be there.

I hope that I get more opportunities to speak about Charlie’s Heart Foundation in the future.  And I hope each time the love I have for our work and our Charlie shine through in my words.