The Privilege of Choice 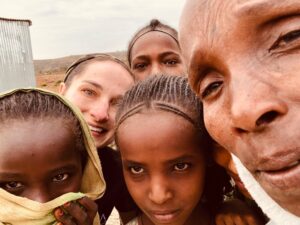 The last week has been a mixed bag of emotions for me, Michael and our family. Coming off of Christmas trips, celebrating the New Year with friends and all of the interactions, thoughts and emotions that go along with those events, left me in a tailspin.  And as characteristic of the fast-paced life Michael and live, during all this we were preparing for a trip to Ethiopia.

Truth be told, while the Christmas season is busy and requires lots of time, much obligation and a healthy dose of family drama, traveling to Ethiopia can be almost a retreat for Michael and I.  Don’t get me wrong, the travel is arduous, 24 hours, add a nervous flyer and mom-guilt for being on the other side of the world and well you get where I’m going. But the payout, once we are there is worth it.  Spending time with people who simply want to care for their families, improve their quality of life and feel safe, really puts life in perspective for this Westerner. It is a trip to serve others. Yet time and time again, we find our lives have been fortified because of it.

So, when Michael made the decision on the evening of January 6th, not to fly out the next morning, it wasn’t an easy one.  And it has been weighing heavily on us since. Our plane was scheduled to fly over Iraqi airspace and we had a layover in Dubai. Given the unrest in the Middle East, we determined the potential dangers weren’t worth the risk.

Admittedly, I spent several days feeling sorry for myself, concerned with the disappointment we might have caused those preparing for us and the letdown of not getting to visit Charlie’s Library and the families we are serving as we had planned.  I have also spent a monumental amount of time telling myself to buck up — basically “Get your head out of your ass, Rebecca!” The decision was made, now move on!

But more recently… after removing said head from ass, my internal dialogue has changed.  I have a feeling of thankfulness for the privilege to make the choice to avoid potential danger and at the same time feeling undeserving of that privilege.  In all of time of ‘woe is me” and sadness of missing our trip, I failed to reflect on the privilege of choice we have, the ability to move away from hostile environments, oppression and war.  It’s privilege many don’t get and one I clearly took for granted.

Across the world and in our own backyards, vulnerable people do not get the choice of avoiding danger.  They live in live, work, eat and sleep and go to school in dangerous places and unsafe conditions. Children in Syria can’t avoid political unrest, rebel armies and war.  Families in Ethiopia didn’t choose to live without clean water, access to education and proper medical care. And people in the Central America didn’t request to live among corrupt governments, be exposed to the control and devastation caused by cartels and grapple with extreme poverty.

As I look at the marginalized people, communities and ethnicities that live in the world, I realize that likely, the only difference between us is… where we were born. I was born in a country, a community and a family where I can choose everyday the safest path.  Not everyone has that privilege. Our privilege of choice, is not something most of us have earned, but has been decided by our birthplace.

Not going to Ethiopia has been such a letdown for me, but also a good reminder that privileges are advantages, only given to some.  And while many are earned, there are those which are not. I am so grateful to have been given the privilege of choice because the country I was born in has afforded me that. But it is my responsibility to use that privilege to support and empower others who don’t have that choice. I needed that reminder and our canceled trip gave me that.

I hope that I can continue to use my privilege for good in service and gratitude to others, remembering that all that separates me from the person living in the most vulnerable conditions,  is the place where I was born.