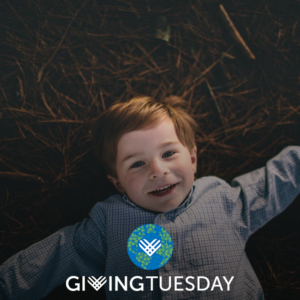 Our beautiful boy was born on March 22nd, 2012. However, it wasn’t until recently, I discovered that my “spark”, Charlie, and Giving Tuesday, a movement encouraging the giving of self, resources, and gifts to others shared the same birth year. I have reflected so much on that, given the gravity of Charlie’s life, the impact he has had on our family and the Foundation we started in his honor and in honor of all vulnerable families across the world.  The parallels between what Giving Tuesday stands for and what CHF supports don’t just coexist but seem co-founded. I’m thankful for this little piece of sunshine I stumbled on.

Giving Tuesday is a global campaign encouraging everyone to give back to their communities in some form on the Tuesday after Thanksgiving. People all over the world spend time volunteering, donate gifts or give funds to nonprofits they feel passionate toward. I find it awe-inspiring that on the same day, from Iceland to Argentina, China to Canada, South Africa to Antarctica, people all over are changing lives and helping others, purely from the goodness of their hearts.

At least, that’s what I’d like to believe. But I suspect for many, charitable giving has become a chore—something they feel like they have to do rather than something they truly want to do. And this breaks my heart. I’m not sure where the shift has come from. On the bright side, it seems charitable giving is increasing and has been for years now. Both 2016 and 2017 saw increases in the amount given the year before, according to Nonprofits Source.

Giving a part of yourself so that others can have more, whether that’s your time or something monetary, is such a fulfilling, beautiful act. I don’t want it to be hollow for anyone. Giving back isn’t something someone should feel like they have to do, I want it to be something they are excited to do.

Charlie had such an open, giving heart. He was so young, but still, if there was anything he could do to put a smile on someone else’s face, he would. It’s why sunshine is such an important symbol that we associate with Charlie. He was a true ray of sunshine in our lives, and he was just as bright and warm. That’s how giving should feel, like warm sunshine.

So, this Giving Tuesday and the general holiday season when most are inspired to donate more frequently, I’d invite you to examine the reasons behind your giving. Are you truly passionate about the cause you’re supporting? Does the act bring you true, lasting joy? Or are you doing it because you feel like you should? I want everyone who decides to donate something of themselves this season to be excited by their giving—I want it to be something they’re glad to do, in the most authentic way… just as Charlie did.

Of course, I’d love it if Charlie’s Heart Foundation was the organization that spurred you to action. But if we aren’t, that’s totally fine too! I believe the missions of all nonprofits are ultimately the same… So giving your assets to any cause that interests you, is supporting the collective mission… to make the world a little better place than it was yesterday.  This Giving Tuesday, I encourage you to find a non-profit that lights your soul on fire, where you can give your time, gifts, money, your skills or anything else that you’re able to. And then, you too will be a part of our global movement to do good.

For more information on Giving Tuesday, check out www.givingtuesday.org