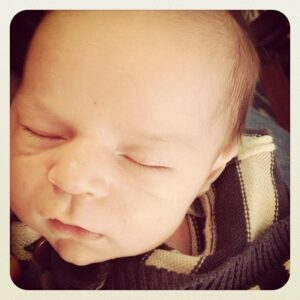 In the weeks and months of COVID, I have felt in so many ways, the most overwhelmed I have ever been and yet found so much peace.  It’s a total oxymoron for sure.  We have spent so much time as a family, forced family fun – to say the least and for the first while, I resisted… we had to keep a tight schedule.  I even wrote it out and posted it on the refrigerator, which practically made it law in our household.

We were up together, Michael worked. I attempted homeschool preschool with the kids. We had scheduled outdoor play and “alone play” – which Ellie so struggled with. Then there was downtime with TV.  I am one that has to fill the day, not waste time, and always try to be productive. What I found during that time of quarantine, was all that time I worried about being unproductive, the moments within the schedule became the most productive because I was experiencing our children.  I was experiencing all of our children, including Charlie. The flickers of him have been everywhere. Here are two more I would like to share.

Ellie wanted to have a tea party, a regular occurrence in our house these days. We love to make mini sandwiches, set the table with my china teacups, which I might add, have only ever been used for these occasions. Ellie drinks lemonade while I enjoy a hot cup of tea. But during this particular tea party, Ellie announced that she wanted to have a special guest for the party – her Stuffy (beloved stuffed animal she sleeps with).  But before Stuffy could attend he must be dressed in one of Charlie’s baby outfits. It was so random, yet so sweet when we found the Tupperware with his newborn clothes in it. The blue and white tiny outfit swallowed Stuffy whole, but she insisted.

He was a newborn, so tiny and underweight that the romper could fit two of him inside. I was a first-time mom with plenty of anxiety over a baby who struggled to nurse but this strong-willed momma refused to give up. I remember the heartache, feeling as though I failed him and yet the instant connection and intense love I had never felt before. It was hard, yet amazing, the joy he brought us. If only we had known, we were getting just five short years, I would have never left the couch where we spent those first months figuring out how to be a family together.

Coming back to the present, Ellie playing with her stuffy, I sighed. In those few moments, I felt Charlie almost like he was in the room with us. It was warm and comforting.

Later in the week, we had another flicker, bittersweet, but precious all the same.

One night, while playing on our street, Ellie randomly asked, “Mommy do I have roller skates?” I hesitated for a second…

As a flicker of Charlie came.

At 4 years and change, Charlie still donned a pacifier each night.  He did not have any desire to give it up. And regardless of the parent shaming I faced, I wasn’t going to make him. However, I wasn’t above a bribe to get things going in the right direction. So we would talk about giving up paci and what he might like to replace it with… A new lego maybe? A special PJ Mask toy?  Nothing seemed to interest him.  Then one day he said, “Mommy, I want roller skates.”  Of course I thought, this is crazy. He is four. No way this is going to go well. However, Charlie insisted he would give up his paci for roller skates.

So we take Charlie to ToysRUs, he tries on the roller skates and Michael and I are both thinking… Well, this is it. He is going to faceplant once and we will have a bloody kid without a paci to comfort him… excellent!

How we were wrong. I kid you not, Charlie stood up and after a few stumbles, took off around the store in those roller skates.  He wore the roller skates home, fell asleep in them, and woke up ready to go again. He just got it and he was good. He never used a pacifier again but he sure used his skates as a replacement. He skated in the house, took them to school for show and tell and when we went to the skating rink with his older cousins, he zoomed past all of them.  He loved those skates and we loved his optimism and tenacity for never giving up. 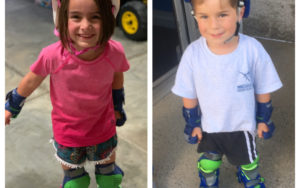 Then I came back to the present… “ Yes honey, we have roller skates.  They are Charlie’s but I know he would be happy for you to use them.”  So that evening I took skates from Charlie’s hope chest where we keep his favorite things and helped Ellie lace them up, just as we did when Charlie was in the toy store that first night.

While Ellie isn’t the “natural” that Charlie was, with help, she has enjoyed those skates and I have enjoyed watching her. She reminds me so much of him, yet uniquely Ellie. And when she asked me a few days later while practicing, “Mommy, do you think Charlie is proud of me?” Holding back the tears, I answered… “absolutely!”  He is proud of you because he loves you and you are his sister, never forget that.

Quarantine life hasn’t been easy for any of us. There have been moments where I could scream… and I did (mostly not at children… sorry Michael).  But there were so many moments, flickers of Charlie as we played, laughed, snuggled, and tried new things, solely as a family. I have felt Charlie’s presence the most in the last few months, more than I ever have before.

Stripping away all the “stuff” – outside influences of work, events, sports, obligations, etc., will do that to you.  When we allow ourselves to disconnect from the noise, you are able to hear and experience what is really important – the memories of Charlie and his continued presence in our family. That is what keeps me grounded, nourished, and whole… even a flicker can spark a flame.