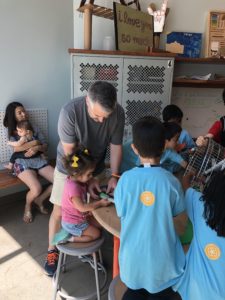 Charlie had a wonderful spirit, temperament, and personality. He was a go with the flow, ready to take on the world kind of kid. That said, he was also human and a child, and just like the rest of us, he also had his imperfections. He was not and never would be a morning person. Getting Charlie out of bed was like waking the Grinch. He would whine and cry, and made you feel like if you messed with him, he was going to take your stocking full of goodies on Christmas morning. Waking Charlie up in the mornings, especially during the school week, was a losing battle … which is why I let Michael do the honors (I’m terrible, I know)! Once dropped off at preschool, Charlie was typically slow to warm up, needing the space to realize that stealing Christmas was probably not the best idea. Things changed for Charlie’s morning routine when Mrs. Teutonico, who Charlie affectionately called Mrs. T, discovered Charlie’s love for paper airplanes.

Charlie loved paper airplanes. He loved making them, flying them, coloring on them, and of course crashing them. Each morning when Charlie arrived at preschool, Mrs. T would help him build paper airplanes that he would fly around the room, gliding through hula-hoops and racing to see which one could go the furthest. Mrs. T made Charlie’s mornings a little brighter.

One of my favorite memories of Charlie was when he entered a paper airplane contest at the Air and Space museum in D.C. He was by far the youngest child and, by genetics, the smallest. But watching him compete with “the big kids” was an honor as he twisted, added weight, and changed the shape of his airplane to get it to go through the objects in each round of the competition. He was completely engaged yet humble to his competitors and happy and proud even though he didn’t make it to the end of the competition. I loved watching him that day.

It wasn’t until a few months ago when we were going through some of Charlie’s things, that we discovered a letter from Mrs. T. She had written it to us after Charlie’s death but, like many things we couldn’t bring ourselves to deal with at the time, it had been tucked away. In reading the letter, Mrs. T spoke fondly of Charlie and the bond she shared with him and his paper airplanes. She described the Paper Airplane Day she and Charlie’s classmates had at school to honor him. All of the children crafted their own airplanes and took them outside to fly, swoop, and soar through the sky. She said the children talked about Charlie, how they hoped their airplanes could reach him in heaven, knowing how much he would love each and every one of them. I was so thankful to find that letter from Mrs. T and know that Charlie’s friends could talk and share memories of their buddy, even in his absence.

On Mother’s Day weekend, Michael, Ellie, and I flew to Austin to meet with A Glimmer of Hope, a non-profit that we were hopeful would want to partner with Charlie’s Heart Foundation to build schools, wells, and health-posts in rural Ethiopia. It has been our experience over the last year that making a decision to partner with another organization is about mutual alignment of the mission of each organization and, even more importantly, a “gut feeling” that working together would be better than working alone. We found that with our first partnership, Addis Jemari, and we hoped to find the same thing with A Glimmer of Hope.  We had already taken an amazing trip with the organization in March to see completed projects and areas of need in Ethiopia. Our missions clearly aligned and our “gut feeling” quickly followed knowing how transparent and forthcoming Glimmer had been with us and their desire to help us grow Charlie’s Heart Foundation. However, it wasn’t until we took Ellie to the children’s museum, The Thinkery, in Austin on Friday afternoon that I knew for a fact, this partnership was meant to be. Ellie moved from exhibit to exhibit, painting, experimenting with air and handkerchiefs, rolling balls through obstacle course and checking out insects under microscopes. But when we discovered a room dedicated to building and launching paper airplanes, she was hooked.

She constructed at least 20 airplanes that day, launching each one of them on a special mechanism that allowed her to aim the airplane towards a hula- 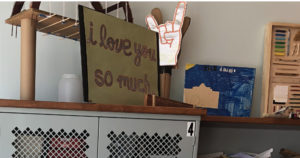 hoop suspended from the ceiling. She loved those airplanes just as much as Charlie did. I was thankful to see another piece of her brother within her. As I watched her, enthralled and so focused, with Michael helping her put on new parts or changing out colors, I noticed a sign behind her on a shelf next to tons of airplane parts that read, “I love you so much.” I was taken aback at first. The sign seemed so out of place in a room dedicated to aviation. But then I realized it was our paper airplane little boy telling us, “I’m here, and you and my foundation are in the right place. I love you so much.”

It’s those moments, the ones that can’t always be explained in words, that make me realize that Charlie is with us and always will be. He is loving on us from afar and validating our decisions and the direction we take for his foundation. Thank you, Charlie. We hope you send many more paper airplanes to us in the future.  We love you so much!