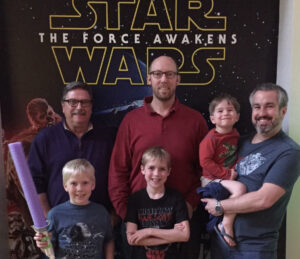 Approximately 6 months after Charlie was born, it was announced that Star Wars was sold to Disney and the 7th movie in the series would be released in December of 2015.  My favorite movies growing up were always Star Wars. Nothing else. I would talk about them and play with the figures for hours on end. I would have conversations with cousins, especially Eric Scott, about when the next trilogy would come out after Return of the Jedi. When the prequels came out in the late ’90s, although not as great as I had wanted, they still helped fill the hope that I had for seeing more Star Wars movies as I got older.

You see, my dad took me to see Star Wars when I was 3 years old. I still remember bits and pieces of it, even the lobby of that old theater in the Beckley, WV mall. It changed my life forever. So when it was announced that the Force Awakens (Episode 7) would come out in December of 2015, my excitement could not be contained because I would be able to take my son Charlie to see it just as my father took me. He would be the same age as I was when I first saw it so many years ago. When it was announced it would be PG-13, I got nervous. Would he be too young to see it and would it scar him forever instead of inspiring him as it did me? So I did what I thought was right and saw it without him. After seeing it and hearing him talk about it, I decided he would probably be able to handle it, so along with his uncle, cousins, and papaw we went to see it. We sat down in that theater and I could sense his excitement and mine. I was still a little concerned that I was making a poor choice, forgetting to account for the 30 minutes of previews that were not age-appropriate. But after covering his eyes a few times, he became hooked. And for the next 2 hours sitting on my lap, I’m not sure if he blinked. And father and son, just like his father and papa before him, fell in love with Star Wars.

After that day, Charlie couldn’t talk about anything else. His 4th birthday party was Star Wars themed with games like pin the lightsaber on Yoda and make your lightsaber out of pool noodles. I remember all the awesome presents he got that day from family and friends, and how excited and grateful he was for all of them. And then he opened the last present from Rebecca and I. It was an x-wing fighter and he was so ecstatic. It was by far his favorite present and he played with it constantly.  He couldn’t wait for the next movie in the trilogy to come out and he constantly asked when the new trailer for Episode 8 would be released so we could watch it together. Life was great. I had my Star Wars mini-me and he had his Star Wars “Geenius” as he would call me.

Then on April 14, 2017, Charlie died. The Episode 8 teaser trailer was released on April 15, 2017. Instead of watching that day with him, I was in mourning and I’m still not sure when I actually watched it, but it was months later. And it definitely wasn’t with the same joy as I had anticipated before his death. Star Wars is now the thing that breaks my heart but also reminds me of my special apprentice and how much he meant to me. I still buy Star Wars figures and Star Wars LEGO’s (you should see my office) almost as if I am showing them off to him. It’s my way to connect to him even though it’s probably a little cheesy. But who the f@&k cares. I know he is looking down on me smiling. That’s all that matters. 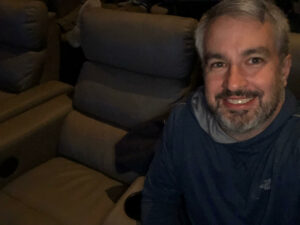 When Episode 9 comes out in less than 3 weeks, I will be excited and sad. Because my boy should be sitting beside me to soak it all in. It’s not fair, nor will it ever be fair. All I can tell you is to hold tight to those little things that help you connect with your kids or parents, no matter how cheesy or ridiculous they may seem to others. What’s important is the bond you make with that loved one. Those are the memories that last forever, long after those loved ones are gone. So on opening night for Episode 9, my mom and dad will be seeing it with me, just as we did for Episode 8 the year Charlie died. And again, like all Star Wars movies I see—in a full movie theater on opening night—there will be what seems to the average patron, an empty seat next to me. But it’s not. It’s for Charlie, my best buddy, and favorite Padawan. His force will always be with us.