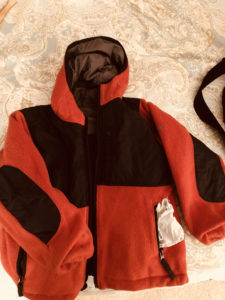 It’s been a little over a year since Charlie died. While some days I struggle to stand up, there are other days where I feel like I can breathe like I did before our world turned upside down. In life, no matter the loss one experiences, the world continues to rotate and time passes. Just like the Bible says in Ecclesiastes 3 verses 1-8 and The Byrds famous song “Turn, Turn, Turn” puts to music:

There is a time for everything and Michael and I have spent many of our days the last several months wondering when the time would come that we should go through Charlie’s things. Since his death, his room has remained untouched. The sheets have not been cleaned. His books and trains are still in the same spot. Even his last magnatile creation, a parking deck complete with individual garages for the matchbox cars it held, was preserved so that Michael, Ellie, and I could go in his room and be reminded what his little hands built just days before his death. And because Charlie was definitely a closet hoarder since birth, all his little trinkets still remained in his nightstand.  He would pick up anything and everything and call it his treasure. He loved to fill boxes with what I called “junk,” and if there was a grocery cart around, watch out! He could stack that thing like a professional homeless person. Once, I accidentally misplaced a new treasure (aka threw it in the trash) and boy did I hear about it from him. I think he was on to me when he caught me putting some of his drawings from preschool in the recycling, “Mom, what are you doing? I worked hard on those pictures. They are special to me!” “Oops!” I responded, “I didn’t mean to throw those away.” Following that day, Charlie hid his special treasures in his room.

Charlie’s room has never been a shrine to him, but a place where many of his memories remain. His door has remained open since after the first week of his death, when I could no longer see it closed. Most evenings after putting Ellie down, we shut his door, just like we would have if he were sleeping soundly in his bed. And in the morning, we open it once more.  Many nights, I find myself closing his door and calling up to Heaven “Goodnight Charlie” and in the morning, opening the door to “Good morning, my love.” Over the last year, we have welcomed Charlie’s friends and family into his room and Michael, Ellie, and I often play trains or read books in there together. We never wanted Charlie’s room to be a scary place for anyone, especially Ellie. She needed to feel comfortable being around all of her brother’s things.

Everyone around us expressed that Michael and I would know when the time was right to clean out Charlie’s room. Maybe it would be months or years from now. But we would know.  Like the song “To Everything, There is a Season,” Michael and I realized a month ago, our time to clean out Charlie’s room was upon us. We wanted his friends and family to have little treasures from Charlie they could hold on to. We both felt the urge to have his things among us, not just tucked away into a confined space. And finally, we wanted Ellie to know that even though Charlie was no longer here on Earth, he would remain in our lives, in our hearts, and in our home forever.

As one can imagine, the emotions of going through our son’s room brought both Michael and I back into a place of trauma, loss, and despair.  As we carefully went through his closet, his dresser, and even his books, the memories of 5 years of pure joy flooded in and mixed with the extreme grief we have felt for Charlie since he died. Michael and I cried, screamed, yelled, and held each other for hours that night while we uncovered so many treasures left from Charlie. His soccer uniforms, rock collections, and his favorite comfy camo pants that he wore more than I am willing to admit. We found pictures in his room from preschool friends and teachers. So many things we knew were there and many others we did not. Many of his special treasures were hidden in his bedside table, waiting to be discovered. There were legos and figurines, handmade bracelets and plastic coins, all which I could imagine Charlie telling us a story of the importance of each one.

It wasn’t until towards the end of our treasure hunt that I hit the lowest point, where I uncovered what I consider the most priceless treasure, Charlie’s handkerchief. You see, Charlie always had the worst runny nose in the winter time. His nose drained like a slow leak in the faucet.  As he wiped his nose constantly, he had a chronic chapped lip. I tried to combat this situation with vaseline at night, which Charlie lovingly called his “mustache.” While it usually helped, his runny nose issue was at its worst the last winter he was with us. So I made little handkerchiefs out of dish towels just Charlie’s size that he could keep with him instead of hard tissues that inevitably made his skin more chapped. I loved watching him use his hankies. He was like a little old man with the spunk of … well, Charlie.  Finding his blue handkerchief in the pocket of his winter coat that day was like finding a hidden treasure buried from view and so precious upon its discovery. It was my Charlie and a reminder of the memories we created with him. A handkerchief made me hit the floor with grief, not because I wasn’t thankful to find it, but it made me realize at some point we will have uncovered all of Charlie’s hidden treasures and going through his room that day was quickly expediting the process. What would we do when we stopped finding trinkets, pictures, and even what I once considered junk that Charlie had left behind for us?  We don’t get to make new memories with him. All we have are those that remain.

It took me several days to get over the emotional hurdle that resulted from finding Charlie’s handkerchief. The thoughts of finite memories of Charlie put me in such despair, I almost didn’t know if I would recover. Then I had a moment of reflection on the last year, the first year we endured without Charlie. We started a foundation to honor his heart and to serve families who are struggling to stay together. I made two amazing trips to Ethiopia to connect with non-profits that we could support to further Charlie’s Heart’s mission. We, along with friends and family, executed a successful carnival to honor Charlie and raise awareness about the water and orphan crisis in Ethiopia and share Charlie’s story with the world. And with the fruits of our labor and Charlie’s Heart, we were able to fund our first well, Charlie’s Watering Hole, to provide safe and clean drinking water in the Villages of Gondar. I realized that these ARE memories we continue to make with Charlie. And although they are not with him in the flesh, they are most certainly with him in spirit. For without our Charlie, his life and his legacy, we would not have had the year of memories we have made with him this year.  And that has been the greatest hidden treasure our Charlie has brought to us thus far.