Fighting the Battle for Others 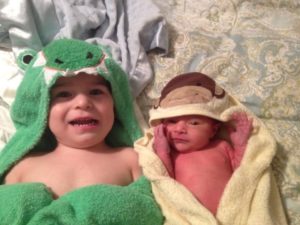 Last night I got on social media for the first time in weeks. Honestly, I had been avoiding scrolling through the family Christmas pictures of all my friends and the Happy New Year quotes of “2017 was amazing, I can’t wait to see wait 2018 brings!”  This is not to say that I am not happy for the lives of others and the health and prosperity of their families.  I truly am.  It has simply been self-preservation on my part.  Trying to keep my strength up for this battle I wake up to every morning.

When I opened my app, preparing myself for the influx of pictures and updates I hadn’t  seen,  the first image that popped up was Charlie and Ellie.  Both were snuggled up in their bath towels, Ellie just days old in Charlie’s old monkey towel and Charlie bright-eyed and laughing with his dinosaur towel.  I remember the night I took that picture of those two.  It was Ellie’s first bath with her big brother, and Charlie had enjoyed every second helping to wash Ellie’s hair with the special sponge they sent home with her from the hospital.  He was such a proud big brother and had already taken his place as protector, making sure not to get any water in her eyes.

The tears welled up in my eyes and before I knew it, I was sobbing.  I literally could not stop.  The suffering and pain of this battle I am living in took over and I raised the white flag of surrender.  I cried like I haven’t cried in months and there was no calming me down.  I thought about the impossible truth, that this is our life, this is Ellie’s life.  Instead of playing trains with Charlie she has to play trains with her other friends’ brothers.  She doesn’t get to laugh and run around the house with Charlie or even have sibling quarrels, like her peers.  And I, I don’t get to watch Charlie learn how to read or play baseball or snuggle him at night anymore.  I don’t get to hold him and tell him how special he is and hear his raspy giggles when I would tell him, “Mommy is going to squeeze all the love out of you!” Last night I didn’t have to strength to pull myself out of this despair, to fight the battle for hope.

During the night, I would have moments of silence, before the cascade of tears would come again.  In one of those moments, I cried out to Michael, “ I just can’t today.  I can’t fight.  I’m just too tired.”  Then my dear husband said to me, “ Then stop.  I’ll fight for you today.  You rest.  I will be your strength.”  It was the moments following his words, that I was able to let go and my sobs turned to tears and my tears turned to sleep.  And I rested.

This morning, when I woke up, my body ached and I felt like most of us did the night after our 21st birthdays, completely hungover.  The emotional hangovers I have felt in the last 10 months have been like no other hangovers I have ever experienced.  They simply wipe you out.  But while laying in bed, still tearful but with no energy left in me to cry, I thought about Michael’s words, “I will fight for you today. You rest. I will be your strength,”  His words gave me permission to let go and accept the strength of another.  They allowed me to rest, but also gave me power because I knew that I was not alone in this fight.

There are so many people around the globe that fight bigger fights than we are facing.  While I fight everyday for hope and joy in the midst of loss and despair, others fight for food, shelter, clean water, education and acceptance.  Those fights are ongoing and confounded with sickness, loss and poverty.  No one should have to feel like they are fighting alone.  Humans are not creatures of isolation and autonomy, but community centered and family oriented.  We deserve to be lifted up by each other, allowed to rest when we are tired and know that we are not fighting alone.  That’s my hope for Charlie’s Heart Foundation, to fight alongside others in an effort for us all to be lifted up, feel supported and loved.