Two Things I Don’t Hold In: Poop and Feelings 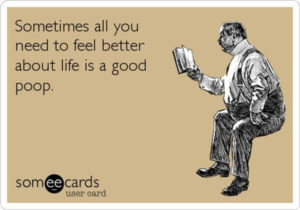 So yes, the title of this post is clearly … well, interesting. Nevertheless, it’s also completely accurate. Since Michael and I met, we have had and continue to have many conversations about poop.

Michael has to have the perfect conditions to poop – preferably his own bathroom, in our bedroom upstairs, with access to a phone to read, play games on, or watch, I don’t know, anything. When we are on trips, that area of his digestive system does not work as well as he hopes and Heaven forbid he needs to go while we are in the car. Gas station pooping is not an option for him. In fact, nobody, quote, nobody should poop in a public restroom, according to Michael. Michael has the ability to hold in poop for hours, a talent or skill I just can’t master.

Me, on the other hand, I am the exact opposite. When I have to poop, I go.  It’s that simple. I get in and out as fast as possible and in any toilet that is available. Don’t get me wrong, the idea of pooping in a porta-potty is awful and measures have to be taken to avoid such a situation, like going in the woods or getting in the car and driving to the nearest bathroom.  Regardless, my poop waits for no one and that means I go when I have to go. I have pooped in many locations that are not desirable. I am sure your imagination can take you to many of them without me describing them in detail.

The poop discussion has been a point of controversy between Michael and I for as long as we have known one another. I don’t understand why he can’t just go when he has to, even in a public bathroom. Or why he needs the proper materials for the best pooping experience, including at least a 20-minute window of time. He, on the other hand, doesn’t understand how I can go in the nasty gas station down the street, why I just can’t hold it in for another 30 minutes until we get to home, and how it’s even possible for me to be in and out in under 5 minutes. His method and my method just don’t seem to coexist or make sense to the other person.

After Charlie died, I realized very quickly that our emotions, feelings, and thoughts could not remain inside us if we were ever going to pull through and live despite our loss. We had to have the space, the people, and give ourselves permission to talk about how we felt in any given moment. Trapping feelings inside would be a recipe for disaster. It’s my motto that holding in feelings, like poop, leads to an eruption that no one wants to smell.

For the first few months after Charlie died, our emotions fluctuated like an adolescent in middle school. One moment we were screaming and the next we were in disbelief that this really happened to our family. The ups and downs were extreme and the smell was worse. But acknowledging to each other the importance of talking about how we were feeling in any given moment or time, was so important. I tried to be true to where I was and what I was feeling no matter who was around me, including the high-schooler who checked me out at the grocery store. I remember that poor fellow, “Hello ma’am, did you find everything you needed today?” “Yes I did, thank you,” I responded. “Well how is your day going so far?” he said to pass the time as the scanner beeped.  “Honestly, I feel pretty shitty. My son died and this is the first time I have come to the grocery store without him. I’m not even hungry but I feel like I have to buy food just to say I did something besides cry today,” I responded. “Oh, umm, I’m sorry …” he stammered. The rest of my interaction consisted of hearing the scanner and signing the grocery bill he handed to me.

I have had many situations like that over the last year. Where I was feeling terrible and asked by someone how I was doing. Instead of “holding it in” like the polite interactions we tend to have with those who are acquaintances or even strangers, I chose (for lack of a better comparison) to poop right on the spot. And honestly, I can say that I don’t regret those moments and I think I might be better off because I owned my true feelings.

Michael and I have, in general, been open about our feelings since we first met. We work to deal with situations that come up in our marriage head on. Brushing them under the table has never been a tactic we have used.  Although we are both stubborn, he more than I of course (love you, honey!) even in our worst dilemmas we have ultimately found common ground and acknowledged one another’s perspectives. Since Charlie’s death, that hasn’t changed. Rather it’s become so much more vital to our marriage and walking this road that on many days we don’t want to travel down.

You see, feelings, like poop, have to come out somehow. They can’t be expected to remain inside forever. I truly believe that if all of us told the truth about our thoughts, we would have healthier relationships, more positive interactions with one another, and the world wouldn’t be so abrasive and divided. Imagine if our country was run by those who were willing to express and act on their true feelings. Wouldn’t our lives be more enriched and our hearts be more intertwined? Take it from Charlie, who always wore his heart on his sleeve. “Mommie,” he would say. “Why do some people always seem mad or sad? I don’t understand.  Couldn’t they just tell someone how they feel? Talking always makes me feel better.” “Yes, my love. It’s ok to be sad or mad. But you are right, talking about it helps you feel better.” If we would all take a page from a five-year-old boy and stop holding in our feelings, maybe we could live our truth, whatever that may be. All I know is, good or bad, in order to survive, my feelings and emotions can never be held in. Just like poop.