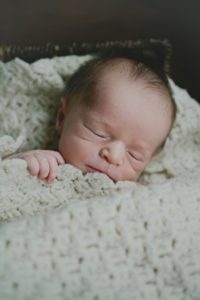 My husband, Michael, often said that if the human race depended on men to give birth, we would have been extinct by now. I have to agree with him on that point.  Pregnancy and Birth are the most beautiful experiences (at least that is what everyone says on Facebook). Truth be told, while I have cherished each one of my pregnancies, there were many parts that were less than comfortable albeit painful; the morning sickness, ligament stretching, heartburn, hemorrhoids (those were a pain in the ass.. hehe), lightning crotch (if you don’t know it, look it up), and all the other ailments that a pregnant woman experiences.  Granted, the baby moving, kicking and seeing your belly house a child, is pretty amazing but it’s not without sacrifice. And this is all before the final event… Labor.

Being that it was my first pregnancy, I was completely by the book… literally, The Bradley Method book, when preparing for Charlie’s birth.  The Bradley Method is all about natural childbirth with little medical interventions. According to Bradley, your body knows just what to do. Medications, IV’s and even a hospital bed isn’t needed according to this method and could potentially affect the health of you and your baby.  Michael and I took three months of classes and got our official completion of the training certificate and I literally thought, “ I got this delivery in the bag!”. So at nine months, when my water broke and I wasn’t progressing after 24 hours into labor, I was not a happy camper. I was a considerably even less happy while on pitocin without any pain medication for 9 hours.  And when Charlie’s heart rate dropped and the concern for a c-section was pending, I was exhausted and terrified. After 42 hours of labor and an epidural, Charles Woody Holt arrived, healthy, but not the way I planned and definitely the opposite way of the Bradley Method.

About six weeks after Charlie’s birth, I have a distinct memory of walking him in the stroller in our neighborhood, fighting with myself over his delivery, as I did since the day of his birth that did not go as planned. Charlie struggled to nurse, wouldn’t latch and we were at the point where I was having to weigh him every time he ate to see how much he was taking in.  I blamed myself and my inability to have a natural birth on Charlie’s nursing issues. And where did I get this correlation, from the Bradley Method. In our training, we were told that augmented birth leads to poor nursing. So here I was, a new mom, struggling with all that comes with a newborn, plus the added notion that I was unable to feed my baby because of my ‘choice’ to get an epidural. Clearly, I had some legitimate baby blues.

Then, all of the sudden I smiled and said out loud “Ok, God… I get it… I get it. You win.”  In that moment, I realized for the first time in my life, I can’t control everything no matter how much I try. I didn’t plan for life to hand me the crappy labor, nor did I want to have have to struggle even more than the average new mom. As the saying goes, “ Life happens, while you are busy making plans.”  It took me 30 years to have that realization. However, it’s been in the last year, since Charlie died, that I have truly felt thankful to have learned this life lesson. 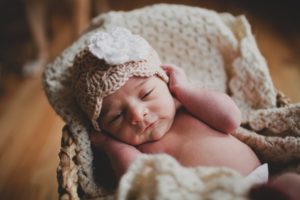 Since Charlie’s delivery, I have had two more.  While I prepared myself to have another hard labor with Ellie, she “came in hot” within the hour after I got to the hospital with no time at all for any medical intervention.

In the last few months of pregnancy with Causby, I did little to prepare for delivery.  And if I am honest about it, I thought even less about the impending labor just because I didn’t want to deal with the anxiety I had facing it.  Would it be like Charlie’s agonizing birth or Ellie’s fast and furious entrance? With two so very different deliveries, I just couldn’t think about how this one might unfold.

Nevertheless, at 4:35 in the morning on Friday, July 13th (of course it would be Friday the 13th) when my water broke, I had no choice but to face the inevitable.  At 10:30 am, when I had only dilated 1cm from 3.5 to 4.5, I had flashbacks to Charlie’s birth. I wasn’t progressing on my own and I couldn’t imagine going through it all again. At  12:30 pm, I was in excruciating pain after walking the halls to get my contractions going. It seemed my efforts were fruitless, as I was only 6 cm when the nurse checked me. I felt scared and defeated.  There was no way I could do this without medication and why had I waited so long to ask for help? In the moments after I pleaded for an epidural, all I could think about was my dear friend’s advice, “Go in, don’t wait, just get that epidural as soon as possible.”  Why had I not listened to her? Now the pain was unbearable, and the end was nowhere in sight. Tearing up while the necessary IV fluids pumped through my veins and the anesthesiologist was called, I tried not to lose it, as the onslaught of contractions drove through my body, one after another without pause.  What felt like hours passed and finally, the knock on the door came and I was thankful to hear the anesthesiologist’s voice. What I didn’t anticipate was simultaneously feeling the urge to push. As I called out to the nurse, “I think I might want to push” truly thinking this was probably just a mental Hail Mary on my part, the anesthesiologist quickly chimed in with, “I will just wait outside the door.”  I never actually got a glimpse of his face that day because moments later, the nurse declared that in fact, I was ready to push. With all hands on deck, the room filled with nurses and the doctor and just a few minutes later and a couple of pushes, Causby Marie Holt was born at 1:01pm. She was 7 pounds 9 ounces of pure wonderful including the meconium that covered her body. I guess you could say she was as nervous as crap just like her mom during the delivery (FYI: meconium is babies first poop).

How I went from 6 cm to delivering Causby in 30 minutes, I will never know.  It still boggles my mind, over a month later. But I have reflected on the emotions and feelings (aka: pain) that was wrapped up in each of my labors and more specifically the epidurals, the magic drug that takes all the pain away. 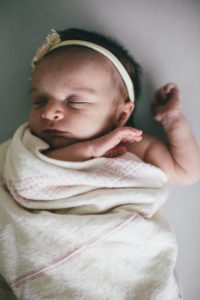 With Charlie, all I wanted was to avoid the epidural, the enemy of all modern deliveries, as my Bradley training had me believe. I planned and fought not to have that drug as a part of my labor experience. And yet, after Charlie was born, my doctor told me that giving me the epidural was actually what gave my body the rest and the preparation it needed for Charlie to be born after such a grueling labor.  I needed to let go of the pain so that I could bring in new life. I needed to give up control. However, with Causby, I was so consumed with fear that this would be a repeat of Charlie’s delivery, that I wanted to numb the pain both physically and mentally when labor got hard. But my body knew better. When I truly couldn’t handle the pain anymore, it ended and baby Causby was born. I didn’t need the epidural to stop what I was feeling. I needed to go through it.

Sometimes in life we want to control so much, that we don’t allow ourselves to ask for help.  We go through unnecessary pain because we as humans think we can do it on our own. But what we really need is God to take the pain from us, to give us an epidural.  We need to be helped and relinquish control in order to heal and move forward. There have been many times in my life when I have just pushed through, not asking God for help and believing I could control everything… as I said, pretty much the first 30 years was dedicated to believing it. Looking back, I wish I would have asked God for the epidural, the help I needed to pull me through to the other side.

There are also times in life when we plead for an epidural like the one I so wanted during my last labor. We ask God to take the pain from us and he doesn’t, at least not in the way we hope.  Sometimes we have to walk through the pain without an epidural to see how it can transform us. I believe we face journeys and hardships that God did not intend on happening to us. God doesn’t want us to hurt or suffer.  But as humans we do. So even though God can not always stop our pain, he can transform into something good. I don’t believe God wanted or intended for Charlie to die, yet he did. Although we experience pain over the loss of Charlie daily, I hope that what God is doing in our lives through our relationships with family and friends, with our newest family member, Causby, and in our work with Charlie’s Heart Foundation, is creating something beautiful from it.