Sunshine in My Pocket 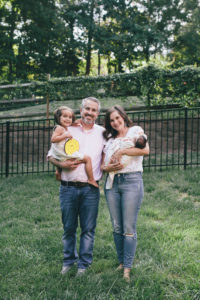 When you lose someone you love dearly, what remains, is their memories.  Sometimes I find that in moments throughout the day, I will almost zone out when something triggers a memory of Charlie.  Watching Ellie play on the swing set outside, I think of the weekend Michael and Charlie spent building it. It came in huge boxes that covered our garage. Charlie, not quite two, was already into helping out his Daddy as we all pitched in. At the end of the day, when we finally attached the bucket swing, Charlie couldn’t wait to get in. Five minutes later, Charlie, tired from the day’s work, dozed off swaying to the motion of the swing. Memories are not just in pictures or objects, but in smells too. Every time I smell a donut, I think about Charlie, his favorite breakfast (well anytime) treat.  On Charlie’s 5th birthday, the last he spent with us, I remember him sitting next to one of his best buddies, Jude, and the smile on his face when he blew out his donut birthday cake. He said it was “so awesome” a cake made out of donuts. The “best cake ever” were his words. Memories also come out in the sounds we hear like each time I hear Charlie’s song.  And no, I didn’t actually write a song for Charlie. And while Charlie was in fact a pretty intelligent kid, he wasn’t quite ready to compose at five… though he did love to make up songs and sing them ad nauseum.

Charlie loved Justin Timberlake’s “Can’t Stop the Feeling” song.  He jammed out to it every time he heard it, whether it was on the radio, on the credits of the Trolls movie (which he asked me to play on repeat) or on TV.  It was the inaugural song on Charlie’s playlist, a group of songs that Ellie requests to hear often because she knows they were her brother’s favorites. When I hear that song, I can picture Charlie, smiling from ear to ear, standing on my bed wearing only his underwear, singing and dancing at the top of his lungs.  It’s one of my favorite memories of Charlie and the epitome of who Charlie was, always happy and full of life. Charlie was our little piece of sunshine. Each time we hear “Can’t Stop the Feeling” memories of Tuesday evening dance parties, road trips and even our dog’s birthday party (yes, we had a birthday party for our dog Cellar complete with party hats, cake and music) remind me of Charlie.

Before Charlie died, I had no idea Charlie’s love for that song was apparent to others outside of us.  But even Charlie’s preschool family, his teachers and friends knew how much he loved “Can’t Stop the Feeling.” They played it in his classroom multiple times a week as they would have dance parties at the end of the school day.  His teachers described his joy and laughter as infectious when he would sing and dance with his friends.

A few weeks after Charlie’s death, Cari, his preschool director reached out to us.  She wanted to remind us about the annual end of year program at the preschool and let us know that they were going to remember Charlie at some point during it.   Each year, the preschool’s fours and TK class performed in front of the rest of the classes as well as family and friends who attended. Charlie would have “graduated” that year and after four years of being in the audience, he would have been the one on stage. The idea of watching all Charlie’s friends sing and dance, knowing he should have been there with them, broke my heart.  Although, I appreciated the gesture to include us, I did not think I could summon the energy to attend the event.

The day of the performance came and I nervously accepted that this was going to be the first of many hard events that we would face that Charlie would have participated in.  I thought to myself, that maybe by going to be with his friends and their families on this happy day for them, would be like a piece of Charlie being there too. Charlie would have been so excited to perform with them.

The children filed in to the traditional graduation march and I watched the little sea of Charlie’s classmates’ faces taking their place on the stage and begin singing.  Many of these kiddos we had known since before Charlie could walk. They had been the children he grew up with, the ones he played with. I tried to imagine Charlie among them, as if he were singing just as loudly but maybe a little more off tune (I said he loved to sing, I never said he was very good at it). The emptiness I felt while sitting in those pews was gut wrenching.  And yet, there was no other place I could have imagined being.

As the performance came to a close, Cari addressed the audience.  She briefly spoke of the little boy whose smile and laugh were precious and had a heart full of kindness.  He was like “a ray of sunshine” she said, tears welling up in her eyes. She proclaimed that each of us should have a piece of sunshine, to carrying in our packets as a reminder of this beautiful soul.  Then she held up a little piece of wood with a sunshine carved in it. It was painted a bright yellow. And on the back it said, “Charlie.” Then the music started again signaling the closing of the performance and the procession of the graduates.  This time, however, it was not the graduation march being played, but “Can’t Stop the Feeling,” Charlie’s song. Tears streamed down my face as all the memories of that song flooded in. But among the tears, I found a smile, because I knew and felt Charlie with us in that moment.  He was smiling for his friends, their families and for us.

In each little piece of sunshine that was picked up at the preschool performance, there was a little bit of Charlie, a reminder of who he was in this life.  As the months have past, Charlie’s sunshine has been ever present in everything we do for his foundation and in keeping his memory alive. Little pieces of sunshine are in the window sills and jewelry boxes, book bags and dashboards, dressers and purses of the friends, family and anyone that feels a connection to our Charlie. His sunshine is present in the butterfly garden planted at preschool by his classmates and their parents, hanging in both Causby and Ellie’s rooms and on the foundation’s website and T-shirt. I even have a tattoo, my first and likely my only, of his sunshine on my wrist. Every time I look at it, I am reminded of him and the big things his little life has given us.

But mostly, the sunshine is a tangible reminder of his song, “I’ve got that sunshine in my pocket. I’ve got that good soul in my feet.” The lyrics, which I interpret (I have no clue if this is the actual meaning. Justin, feel free to chime in) as someone feeling joyous and grateful just to be alive and wanting to share that feeling with others. The lyrics are so reflective of Charlie who was so happy and content just singing and dancing while sharing his light with the world. Charlie will always be the reason we do the work we do with his foundation. We want to give children and families the opportunity to just be happy and shine, together,  just as we all should.

Silent Images, a local nonprofit, did this wonderful video for us. Watch it to learn more about the story behind Charlie’s sunshine.