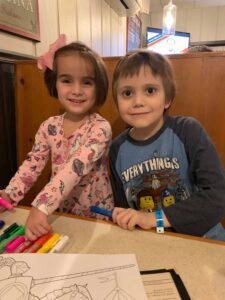 I began working at the Children’s Hospital as a Hospital School Teacher shortly after Charlie turned one. I love working with the patients at the hospital. The families I have met, have grit, are resilient, and pretty damn tough. You have to be, you have no choice when you are dealing with chronic and sometimes terminal childhood diseases.

One of the biggest takeaways as a hospital teacher is meeting people where they are, not where we think they should be, and honoring that. It’s something that unfortunately I had first-hand experience with after Charlie died. No one could change our situation, our loss. But meeting us where we were, emotionally, mentally. And supporting us there, that was how we knew people cared.

When I returned to work after Charlie died, I promised myself, it would be the one place I would not share Charlie. The families whose children are seeking treatment needed my support, not my grief. And everyone’s diagnosis, treatment, story is different. I couldn’t assume to know theirs and they definitely didn’t need to bear the weight of mine.

Then I met Colton, a little over a year after Charlie died, the fall of 2018.  He was a smart, witty, and spunky 7-year-old boy. And he was a great conversationalist. He loved his siblings, Abigail and Connor… always adding that Connor, his little brother, could be annoying at times.

I had an instant connection with Colton. He had such a sweet-old soul, just like Charlie.

Colton and I worked together for several weeks. He was engaging, a hard worker, and had an infectious smile. I would joke with him that his hair looked like a mop, but he refused to let his mother cut it. The crazier it got, the more I would tossle and twirl it, claiming each time that pretty soon I would be able to put it in braids. He had a great sense of humor and knew how to use it. And by his energy and zest for life, you would never have known he was battling AML, Acute Myeloid Leukemia. Each time I walked him back to his room, I would wave goodbye, looking forward to our next session together.

It was one day while talking to Colton’s mom, Stephanie, that I felt the urge to speak about Charlie.  I hesitated, knowing the promise I had made to myself, fully intending to keep it. But the way Stephanie spoke about Colton, her concern for him, her feeling of inadequacy and not knowing what was next for his treatment, I just felt a tug, a tug of knowing what a mother’s love and angst for her child feels like. Then all of the sudden, I blurted it out… Charlie, his story, his life, and his death.  Then I told her how thankful I was to work with Colton and how much he reminded me of Charlie.

The time I spent working with Colton and his family was such a treasure, not only for me… But for Ellie.

Colton, being the inquisitive and kind kiddo that he was interested in me, my family, and children. He would send me home with gifts for Ellie, a picture or a rock for her rock collection.  She in return wanted to know more about Colton and was fascinated that he lived on a farm with real live horses. 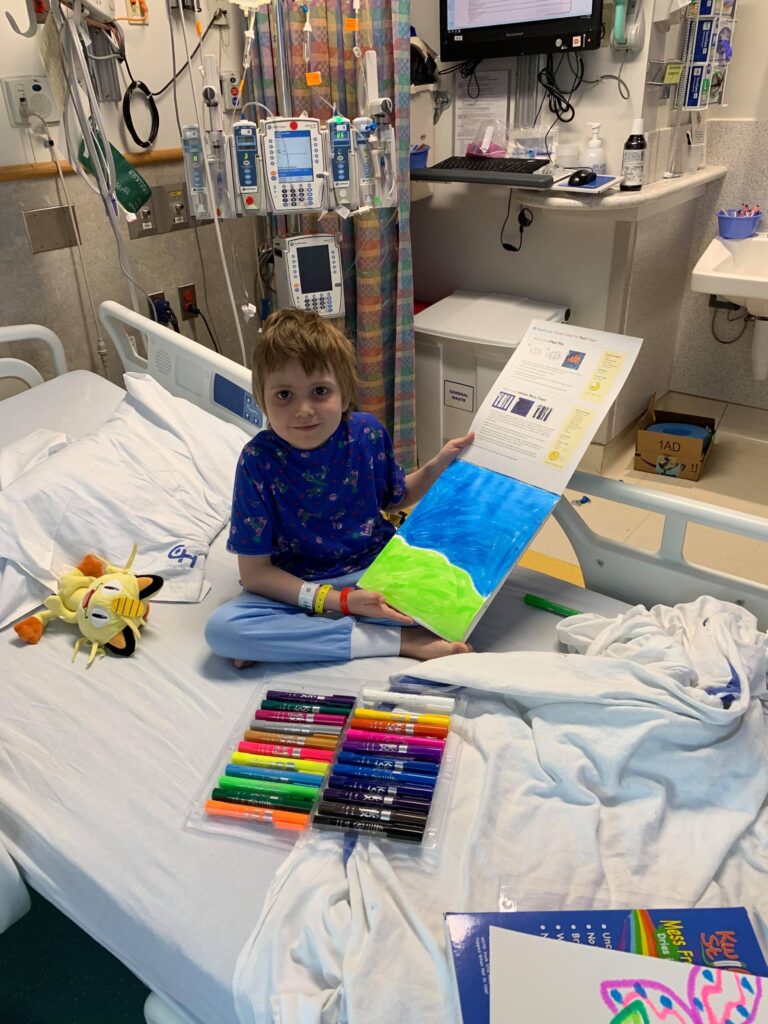 Colton showing his art from one of Ellie’s packages

Once Colton discharged home, Stephanie and I kept in touch, knowing that while Colton’s time in NC was likely over, his treatments at other hospitals were just beginning.  We even met for dinner one night when they came back to Charlotte for labs. Ellie and Colton sat together, Colton putting up with Ellie wanting to tickle him while they colored and talked of Christmas and pokemon. I loved watching the two of them together.. Very sibling-like, both loving and annoying towards each other, all at the same time. It was the first and only time Colton and Ellie met in person. But a memory I will always cherish.

For the next several months, Ellie and Colton became pen-pals.  We would send Colton packages to his home in Virginia or the hospitals where he was receiving treatment. And he would send Ellie cards, drawings, and videos. Ellie began asking each day, did mail come for me?  Did Colton send something?  She loved getting his knock-knock jokes and sending one back in return or the helicopter cut-out he sent, with her riding in the front seat.  She would laugh, “Mom! That Colton is silly, he knows I’m too young to fly!” Ellie loved hearing from Colton and I was thankful for their sweet, long-distance friendship.

It has now been one year,  one year since Michael came into the bathroom while I was bathing the kids and said, “Colton died.”  I almost didn’t believe him. No way could this have happened so fast.  I remember letting it sink in and yelling at Michael, “don’t lie to me!”  He wasn’t lying, but I hoped he was. I cried tears of madness over the death of another child.  I cried for Stephanie, Colton’s mom, Abigail and Connor, his siblings.  I was enraged over another family suffering as ours has and the path of grief they were about to embark on.  I wished I could stop it, but knew I couldn’t.  And that made me infuriated.

He wasn’t even that sick, I told myself. He just now started feeling bad. But childhood cancer has a way of doing that, keeping the strong, lively child looking and feeling good while simultaneously destroying his body. Cancer took Colton, just seven days after Ellie wished him a Happy 8th Birthday.

It took me several days to tell Ellie, who still waited by the mailbox to hear from Colton. How would she deal with the loss of a friend after already losing her brother?  She knew he was sick and needed special medicine that you could only get in the hospital. But she also knew that her grandmother had cancer, twice, and had recovered both times. As heartbreaking as it was, I finally told Ellie. 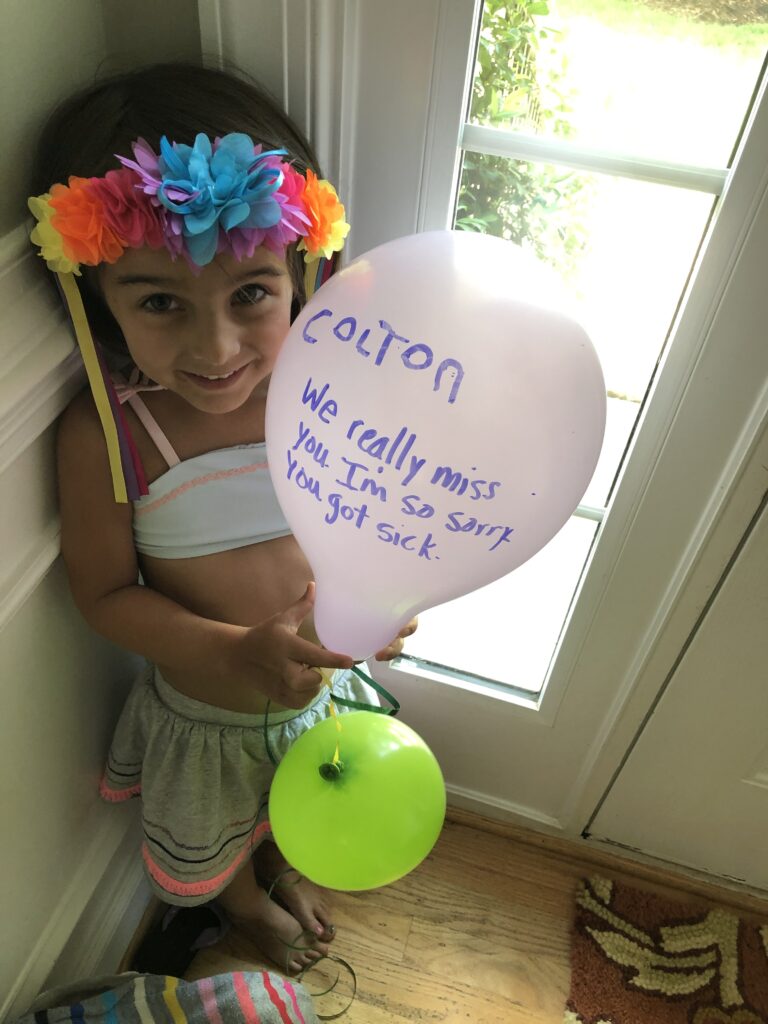 Sending Colton and Charlie a package in Heaven

So just as we do each time we want or need to talk to Charlie, we filled a balloon for Colton and Ellie wrote a message, “Colton, we really miss you. I’m so sorry you got sick.”  We tied it with ribbon and went to release it.

But just before she let go, she said “Mom, let’s send one to Charlie too.  And tie them together.. because now Colton will meet Charlie and they can be friends too”  So that day, we sent two balloons to Heaven, one for Charlie and one for Colton, tied together so they wouldn’t get separated. 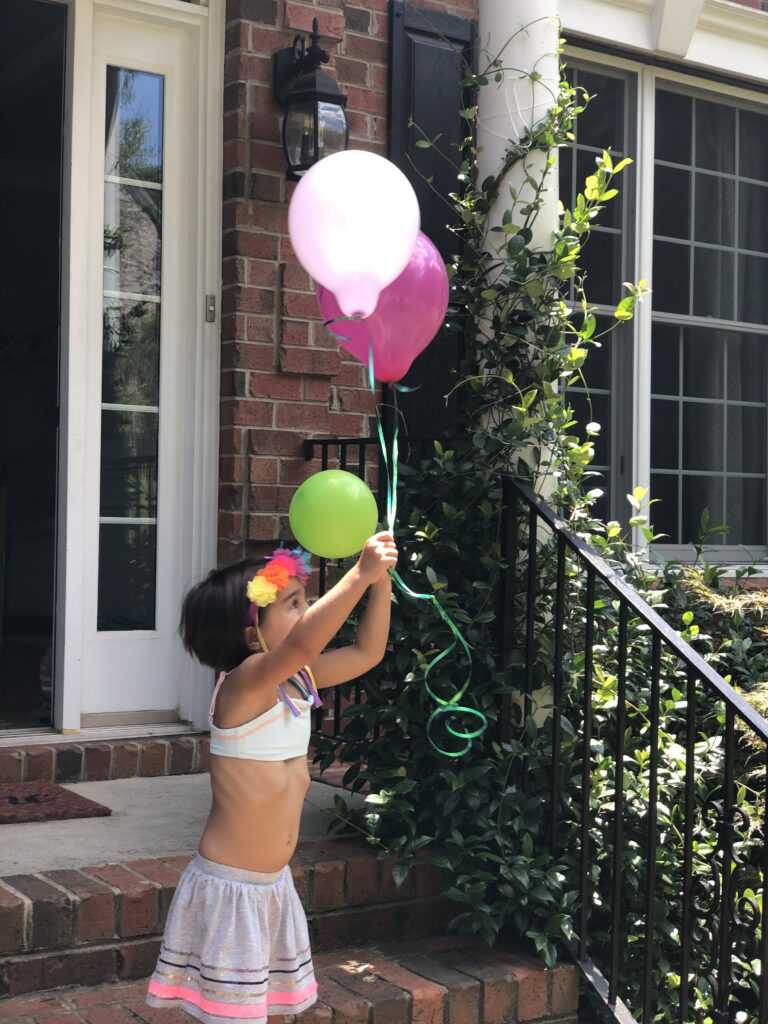 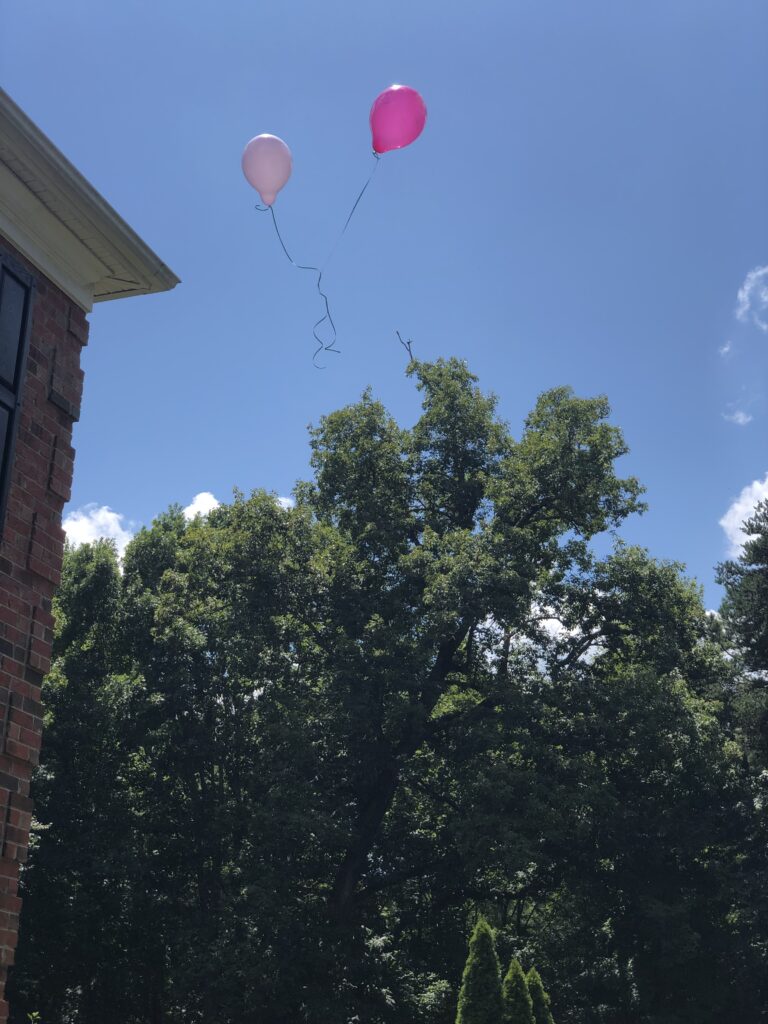 Ellie speaks of Colton often. She talks about her friend in Heaven, who is with her brother now too. And at night she sleeps on the tie-dye pillowcase Colton made her. It was the final correspondence she received from him. Ellie takes that pillow wherever she goes, telling whomever she meets, how special it is to her. 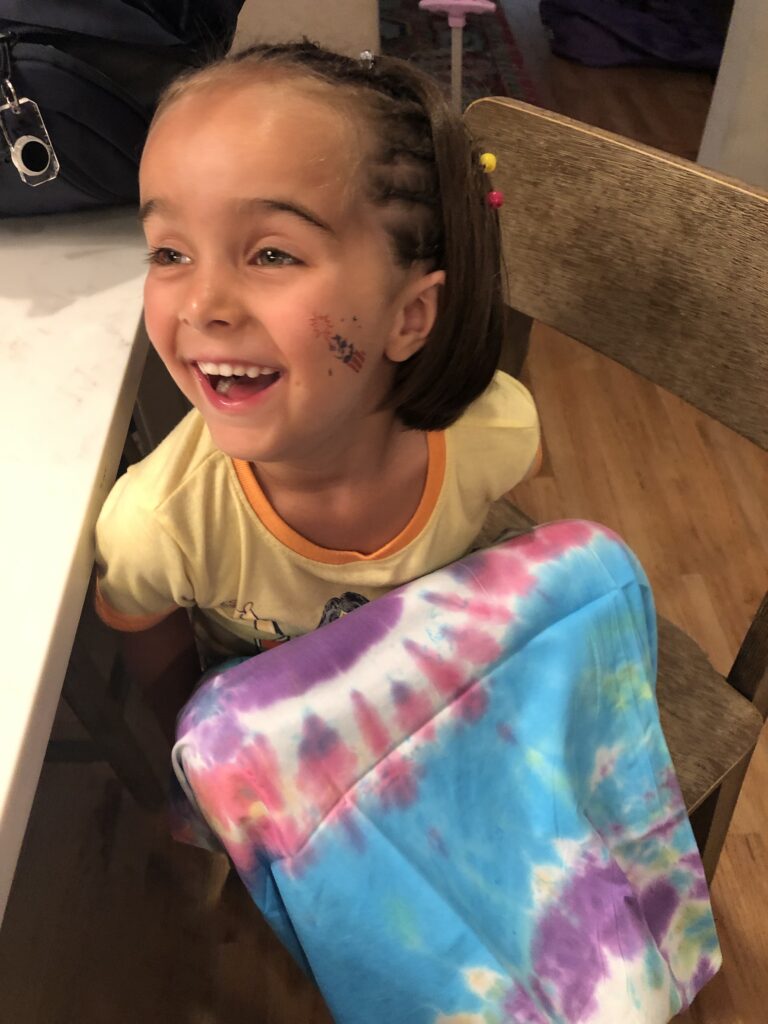 Since Colton, I haven’t shared Charlie with any other family I have worked with, trying to keep that promise to myself even though I failed with Stephanie.  I spent a lot of time feeling awful about bringing my personal story into my profession. But I have begun to finally let that go. I know I can’t go back, only forward. And I am so thankful, thankful to know that my life is fuller and so is Ellie’s having known Colton. I can only hope that Colton and his family feel the same.

We love and miss you Colton. Thank you for letting us into your heart and sharing your smiles with us.

* Only 4% of the billions of dollars the government spends annually on cancer research is directed towards treating childhood cancer.

* Cancer is the #1 cause of death by disease among children