Jesus in a Pringles Cup 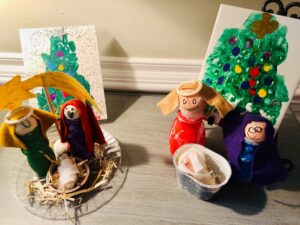 Recently, Ellie brought home her Christmas project from school.  It was the same sweet nativity scene Charlie created three Christmases ago and last Christmas he share with us on Earth. So many emotions were placed on the table where Ellie put her manger scene, right beside Charlie’s. Of course the tears came first.  I’ve been overcome with the feeling of loss this holiday season. Seeing how proud Ellie was to be like big brother, not only made me feel grateful that he plays a huge role in her life, but also incredibly sad that he is not with us.

I’ve looked at each Nativity scene, each one a little different… Mary is wearing lipstick on Ellie’s.  Charlie’s Joseph has eyes that look like they are popping out of his head (although I’m pretty sure that would be an accurate reflection of a new father’s face).  Ellie likes to point out that her baby Jesus lies in an empty guacamole cup while Charlie’s is sleeping in a snack size Pringles container to which she adds, “Mom, I like Pringles better than guacamole.” (“Thanks for the deep reflection, Kid”— I say to myself.)

I love both Nativities so much, not only for the artistic commentary that they procure in Ellie, but because the meaning they have for our family.  I look at Charlie’s nativity and remember, how sweet and innocent our family was, Christmas 2016. We had a precious little boy and tenacious little girl, “the perfect family”— we were often told.  We were blissfully happy… just as I imagine Mary and Joseph were.

Mary and Joseph, newly engaged had the same sweet innocence. Joseph, a carpenter and Mary were preparing for a future together… a family, a home and a fruitful life.

Then I look at Ellie’s Nativity.  It’s beauty and place next to Charlie reminds me of the sadness, the loss, the continued grief we experience since 2017.  It takes me there very quickly, down to the depths of darkness.

And then, I realized both Mary and Joseph’s lives we turned upside down as well. Hope and anticipation turned to fear and uncertainty when they each learned the news that Mary was pregnant.  Mary, a virgin did not understand how she could be the Christ-child’s mother. And Joseph, instinctively wanted to send Mary away, a fate that was kind in comparison to the legal ramifications she could have faced in ancient times.  How could this be happening to a couple whose relationship was founded love. Shattered would seem to be the right description for Mary and Joseph’s reaction.

But then I look at Ellie’s Nativity again. And through the tears, I smile. In the depths of our despair, I can be pulled back into the light, to God’s presence and hope for our family.

I imagine Mary and Joseph experienced similar feelings, throughout Mary’s pregnancy the darkness (the unknown) and the light (the hope of God’s redemption).

When Mary was visited by the Angel Gabriel (Luke 1:26-28) who tells her not to be afraid that “the Lord is with you,” I believe a modern day response by Mary would have been “ I mean seriously!  You have to be kidding me. My life is ruined. Joseph is going to leave me and this is crazy. WTF!”  Ok, so the WTF would be my personal response. But the rest is truly applicable.

And Joseph who was also visited by the angel of the Lord in his dreams must have felt so deceived.  In his confusion over Mary’s pregnancy, the angel says just as was said to Mary “Joseph, son of David, do not be afraid…” ( Matthew 1:20)  Again, modern translation, in my humble opinion would be “Umm, that’s impossible! She and I haven’t even done it!  I am being visited by an angel who is telling me my girlfriend is pregnant with the Holy Spirit! Nice try dude… I’m not afraid, I’m terrified!”

Both Mary and Joseph had to trust one another.  But above all, they had to trust God through this unimaginable journey they were walking through.

As I think about Mary and Joseph’s journey, I know our family’s journey is pale in comparison. But trusting in God’s love, is all we have, just as Mary and Joseph.  Living our life without Charlie is like breathing without oxygen. We have to count on God to help us breathe, each and everyday. It isn’t easy and sometimes we don’t want to do it.  But we walk on, just like Mary and Joseph. And we are met with obstacles — loneliness, sadness and anger just as Joseph and Mary were. Neither of us asked to go on this journey and the road hasn’t been smooth at all.

When I look at both Charlie and Ellie’s nativities once more, I think about our trust in God and admittedly, for me,  it’s a continual struggle I have to believe that God will and is redeeming Charlie’s death through the people and blessings he has placed in our lives including friends both new and old, Charlie’s Foundation and all that is yet to come.

My guess, which is not biblically grounded, but grounded in humanity — is that Mary and Joseph struggled as well to believe that God would deliver.  How could they not as human beings? But in the end, their journey began the greatest redemption story, the birth of their beautiful baby boy, a little one who would be named Jesus…lying in a Pringles cup.