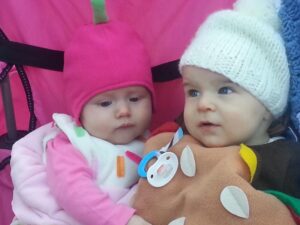 The start of a sweet friendship between a cupcake and a hamburger.

Charlie’s favorite celebration is upon us once again. This will be the 3rd Halloween he hasn’t been with us and I regret to say, it hasn’t gotten easier for our family. The memories of Charlie and his bestie Olivia, running along from house to house (ok, so Charlie would drag Olivia “COME on LIVI!”) getting candy and showing off their costumes run through my mind this time of year.

Halloween traditions with our family and Olivia’s family for the 5 years Charlie was with us are among my favorites. It solidified a bond of friendship with that started with a 4 month-old cupcake and a 7 month-old hamburger.

They were an unlikely pair of friends, a petite brown-haired boy and a tall ginger girl. But Charlie and Livi became inseparable. Amy (Olivia’s mom) and I would joke often that when they reached High School, Charlie would likely copy Olivia’s homework, while Olivia would lean on Charlie to keep her in his social circles. Both would protect one another through and through. That much was clear in their 5 years together.

Yes, Charlie and Livi both had many other friends. But there was never any jealousy between them. Olivia always included Charlie and Charlie, Olivia. I was such a symbiotic relationship. And so beautiful to watch as their parents.

There were sleepovers, playdates, family get-togethers. They had wild imaginations, told stories and sang songs. Where Charlie was more adventurous, Olivia was more precise, calculated. Charlie would speak on a subject and Olivia would gently, but directly correct his inaccuracies. Both Charlie and Olivia had their insecurities, but together they created an unstoppable force.

I remember their last Halloween together. Charlie, had already picked his costume, Superman — one that we went back and forth on whether or not to buy a Costco. It was early September when we came across the budget-friendly, surplus display. He desperately wanted to be Superman, but such was his history, the smallest size was large on him. I explained to him that we would have to pin it (it’s the closest I come to sewing) and wouldn’t he prefer to look around. But he was adamant, “No, I want to be Superman.” I told him, if we took this costume home, he couldn’t change his mind, as Halloween was almost 2 months away, a lifetime on a kid’s calendar. “Yes, yes.. Mom… I promise. This is it! I want to be Superman.” There was no stopping him.

And then a few weeks later… Charlie found out what Olivia was going to be for Halloween.

PJ Masks was their newest obsession, a cartoon show about 3 little kids that become superheroes after they go to bed at night. Charlie and Livi loved to run around fighting bad guys together, often putting them in “ge-ail” as Charlie would say. So of course when Olivia announced that she would be Owlet, from the show, this changed his trajectory for his Halloween costume immediately.

Now, if you know me at all… I love a life lesson with natural consequences. And this was a perfect one. I explained to Charlie, he had chosen his costume and made a commitment to it. We bought and paid for it and he promised this was what he wanted. So he had to stick with it. Charlie wasn’t happy with my response but went along with it. Although every few days, he would bring up how cool it would be to be Gecko for Halloween.

As a parent, I believe holding strong on your commitments is vital and I can be a real bi*!@% when it comes making my kids follow through. But, when a friend offered me a Gecko costume, just the perfect size for Charlie, a few days before Halloween, what was I to say? 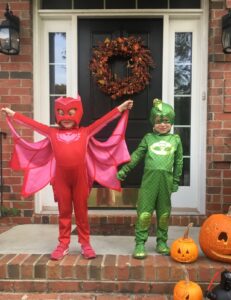 Although I felt in some ways that I betrayed my own parenting motto, seeing Charlie put on that costume was one of the sweetest moments. Dressed all in green, his little bootie looked so cute and that giggle and grin was perfection. But the complete package was watching Charlie and Livi together, Owlet and Gecko, on Halloween night. They barely broke character as they ran from house to house (again, Charlie ran, while calling with patience to Livi to hurry up!) Those two friends together on what would be Charlie’s last Halloween was priceless.

We still have his Superman costume, the one he was supposed to wear, hanging in the dress-up closet. It’s still pinned to Charlie’s size. When I come across it, I am so thankful that I bent a little that last Halloween because the memories of a little green gecko and a slightly taller, pink owl still make me smile. Charlie and Olivia were so different, but innately the same. Their friendship was beautiful and unique. They supported one another, loved one another and took care of each other unconditionally.

My heart breaks for Olivia and the loss of her Charlie. I hate that we won’t witness them grow together in life and friendship. And while I hope Olivia finds friendship like that again, selfishly I pray it will never replace Charlie’s space in her heart. But I know for a fact their bond was rare and something we can all learn from. I hope that each of us allow ourselves to be vulnerable enough to experience that kind of friendship, like the one which started with a cupcake and a hamburger on Halloween night.