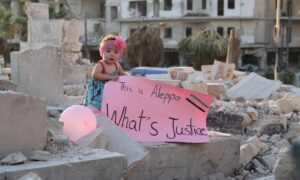 It’s so easy to get wrapped up in our own lives – and our own grief. It’s easy to believe we are the protagonist in life when in reality, we’re a small player in the world.

I was reminded of this recently when I watched For Sama, a documentary that recently aired on PBS.

For Sama is a documentary of raw footage captured and edited together by Waad al-Kateab, a journalist who lived in Aleppo at the start of the war in 2011 until early 2017, when she, her husband and their 1-year-old daughter were forced to exile themselves. The documentary serves as a love letter to Sama, the daughter Waad has in the midst of the war.

The Syrian War has been going on for nearly a decade, and it’s a complicated affair. I want to take a moment to break it down just a few of the basics before I talk more about the documentary. Unrest in the area began in 2011 as a part of the larger protests in the Arab Spring. It escalated that year when the Syrian government violently suppressed protests through mass killings, which Waad shows in the beginning of her documentary.

The Syrian government, led by President Bashar al-Assad, is backed by Iran, Hezbollah and Russia and is fighting against several rebel groups in the area. Russia began directly intervening in the war in 2015, using deadly airstrikes to recapture Aleppo in early 2017. It was at this point Waad and her family were forced out of the country, but the war is ongoing.

Waad and her husband Hamza became involved with the resistance early on: Waad as a journalist capturing videos that the world was watching and Hamza as a doctor who put together a hospital to help treat rebel fighters as well as innocent individuals injured in the airstrikes or by government forces.

The documentary touched me deeply while watching it. It is the most authentic documentary I have ever seen and one that gives you a real understanding of what living in Aleppo during the Syrian civil war is like. We live in a world where we are questioning the accuracy of our news sources and trying to decipher between fact and opinion. There is nothing to decipher with For Sama. It is scary and necessary for everyone to see.

Watching the documentary left me, in one word, appalled. The conflict in Syria has been going on for nearly a decade and it’s become wildly confusing for anyone following along, even those on the ground. Even Waad acknowledges at one point in the documentary that violence is everywhere, even among the rebel forces trying to drive the government out. How can something so horrific go on for such a long time? How can families, schools, and hospitals be bombed for years with no end? And with, what seems like, little help from the international community?

Additionally, how is this war not in our daily news cycle more? I know that there are news organizations in the U.S. faithfully covering what is happening on the ground, but why is that being drowned out by so much else? Why aren’t we angrier as a nation about what is happening to children and families in Syria?

Above all, watching this documentary was humbling for me. Here I am writing about grief, sharing our journey of Charlie’s death, but I write in the comfort of my own home.

Now I think often about Waad and Sama and their family. They lived in a state of trauma every single day for nearly the first year of Sama’s life, and for years prior to Sama’s birth. They continue to live in trauma as they left their city and country to try to make a life in a foreign country. You can truly feel Waad’s heartbreak at the end when she asks Sama if she will forgive them, when she’s older, for staying in Syria as long as they did; then she asks if Sama will forgive her for leaving.

The take away for me is this: most of us would consider the fact that they “got out” a blessing. But the trauma will follow them. I have trauma, and it follows me wherever I go when it comes to Charlie’s death. But Waad’s trauma, Hamza’s trauma, and Sama’s trauma make my experiences feel small. I hope they have found kindness, support, and love in the UK where they live currently.

I know that For Sama is considered a love letter to her daughter, but I think the documentary created by Waad is a letter to all the sons, daughters, mothers, and fathers who need to hear this story. And we all need to hear it. I’m so grateful Waad was brave enough to share it.

Since watching the documentary a few weeks ago, I’ve been thinking often about how I can help. How can I be as brave as Waad? There are lots of organizations doing great work in Syria, including the International Rescue Committee, Doctors without Borders, and Save the Children. We’re hopeful we can support refugees locally through our upcoming grant cycle. But for now, I want to encourage all of you to take some time to watch this documentary. Awareness is the biggest step we can take to a better future.

You can watch the entire documentary for free here.